Protest Against bad behavior by Police for Girls and Women 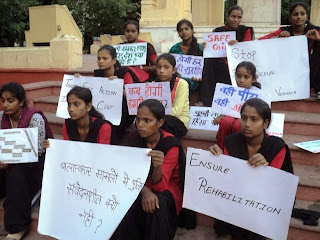 and we choose every month an sexual violence issue for protesting.

On 29th september 2013  at G.P.O. under Mahatma Gandhi stachue, we strongly protest against police role in sexual violence cases.
In Kushinagar dist. a minor and SC Shedule Caste  girls was raped on near 23rd sepember, when she went to police station for filing report with her father, Police Incharge told to girl" which your part raped? I will see that."

and then she forcely saw girls internal body and abused her father and her too.

we are  demanding that make police sensitive in sexual violence cases and suspend police officer.